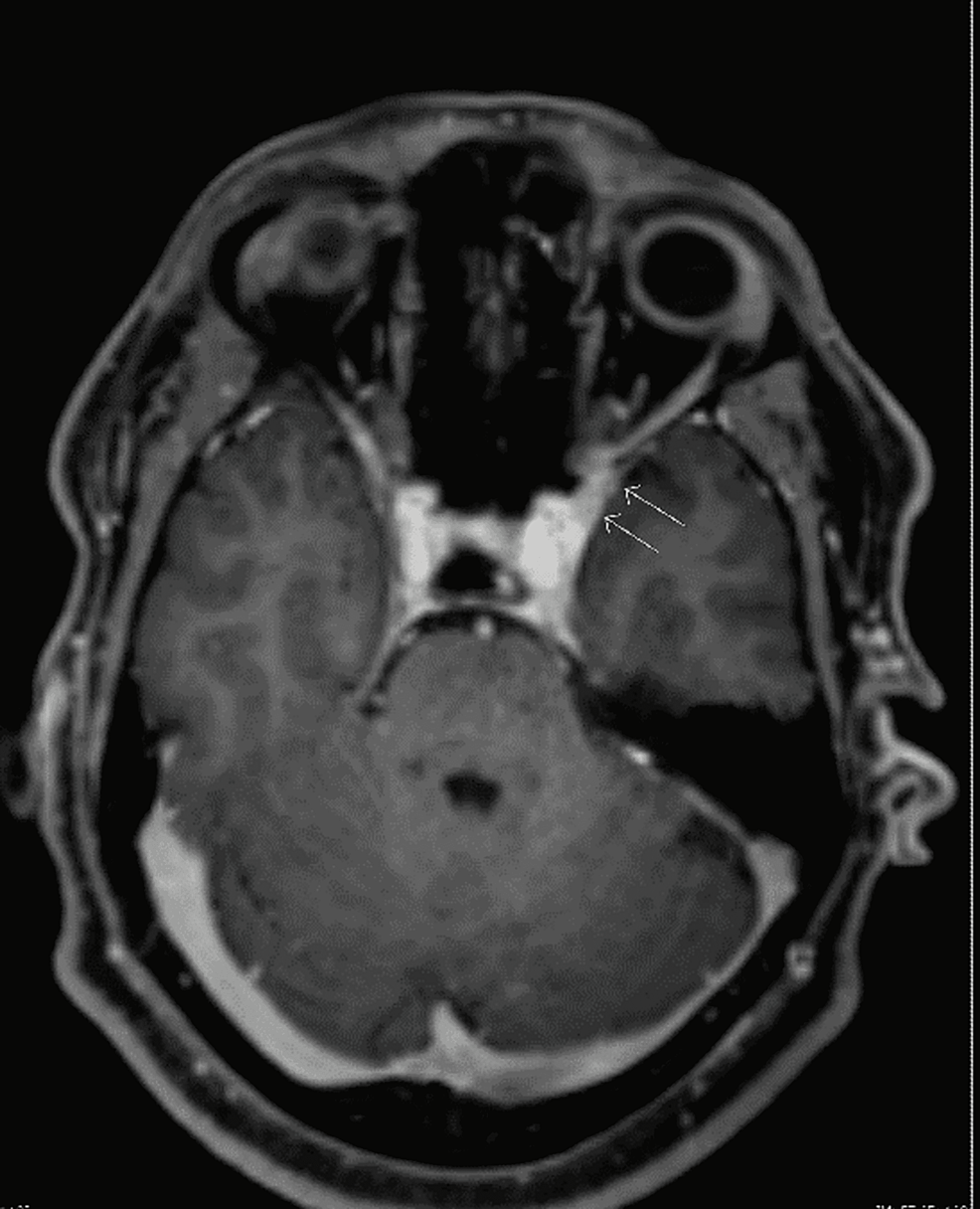 A case report on a unique explanation for headaches with ophthalmoplegia: Tolosa-Hunt syndrome

Tolosa-Hunt syndrome (THS) is an extremely rare disease characterized by painful unilateral ophthalmoplegia triggered by idiopathic inflammation of the cavernous sinus affecting the third, fourth and/or sixth cranial nerve. Corticosteroid therapy effectively improves the symptoms of STH; thus, early clinical suspicion and diagnosis are essential. We report the case of a 37-year-old patient who presented with left eye pain and double vision for four days. The physical examination was significant for oculomotor, trochlear and abductor nerve paralysis of the left eye with slow light reflex. Contrast-enhanced magnetic resonance imaging of the head showed mild asymmetry of the cavernous sinus regions with fullness on the left side and focal lateral thickening, confirming the diagnosis of STH. The patient’s symptoms improved significantly upon initiation of oral corticosteroid therapy.

Tolosa-Hunt syndrome (THS) is an extremely rare disease with an estimated annual incidence of one case per million per year [1]. STH is characterized by painful unilateral ophthalmoplegia triggered by idiopathic inflammation of the cavernous sinus. HRT was first described in 1954, and its marked responsiveness to glucocorticoid treatment was described a few years later [2,3]. STH has a similar incidence between men and women and can occur in any age group [4].

Patients present with constant gnawing pain behind the eye that may begin days before the ophthalmoplegia. Patients may also have dysfunction of one or more of cranial nerves III, IV, VI and the ophthalmic branch of cranial nerve V due to inflammation in the cavernous sinus. Although typically unilateral, bilateral symptoms occur in 4-5% of cases [5].

The diagnosis of Tolosa-Hunt syndrome is suggested by clinical manifestations, supported by neuroimaging findings and clinical response to corticosteroids.

HRT diagnostic criteria recommended by the International Headache Society include unilateral headache, in addition to granulomatous inflammation of the cavernous sinus, superior orbital fissure or orbit demonstrated by magnetic resonance imaging (MRI) or biopsy, as well as weakness of one or more of the ipsilateral cranial nerves III, IV and/or VI. Headache must be ipsilateral to the site of inflammation and develop with or precede oculomotor paresis by ≤ 2 weeks, and another diagnosis does not better account for symptoms [6].

A contrast MRI is crucial for the diagnostic workup of a patient with painful ophthalmoplegia, primarily to exclude other causes [5,7]. In patients with STH, MRI features may include enlarged cavernous sinus with abnormal tissue strongly enhanced by gadolinium, abnormal convexity of the cavernous sinus wall, and focal narrowing of the internal carotid artery intra -cavernous. [8-10].

The administration of glucocorticoids has diagnostic and therapeutic values. Rapid resolution of pain (within 24-72 hours) confirms suspicion of STH [4,5,11]. And improvement of cranial nerve palsies with regression of MRI abnormalities over the next two to eight weeks provides further confirmation of the diagnosis. [7].

Presentation of the case

We present the case of a 37-year-old Asian man, known to have primary hypertension, who presented to the clinic with the complaint of left eye pain and double vision during four days, without any associated fever, headache, vomiting, limb weakness/numbness or trauma.

On a physical exam, her vital signs, including her blood pressure, were within the normal range. Neurological examination showed intact motor and sensory functions. Examination of the cranial nerves and eyes revealed complete ophthalmoplegia in the left eye, with a lackluster light reflex. Examination of the right eye was normal and there were no other motor or focal sensory neurological deficits.

The patient was immediately transferred to the emergency department (ED) for further evaluation and management. During an ophthalmological and neurological examination in the emergency room, it was discovered that he had a frozen left globe, indicating paralysis of the oculomotor, trochlear and abductor nerves over the left eye, with mild ptosis and a slow light reflex. .

Contrast-enhanced magnetic resonance imaging of the head showed mild asymmetry of the cavernous sinus regions with relative fullness on the left side and focal lateral thickening, which was greater post-contrast enhancement impinging on the apex orbital and superior orbital fissures (Figure 1). No signs of intracranial hemorrhage or venous sinus thrombosis.

Figure
1: MRI of the brain in T1 view with contrast enhancement showing slight asymmetry of the cavernous sinus regions with relative fullness on the left side and focal lateral thickening.

As a result, the patient was admitted and started on oral prednisolone 60 mg daily for two weeks with a taper plan. Symptoms then improved within 72 hours and the patient was discharged home and given an outpatient follow-up appointment.

When evaluating patients with headaches in primary care or the emergency department, the most crucial task is to confirm the absence of alarming symptoms, as these may indicate a serious secondary cause. [12]. One of the lesser-known causes of craniofacial pain is Tolosa-Hunt syndrome (THS), which consists of eye pain and ocular muscle weakness attributed to one or more ocular motor cranial nerve palsies. Various mixtures of these cranial nerve palsies may occur, locating the disease process to the region of the cavernous sinus/superior orbital fissure [13].

Although it is known to be a benign condition, patients should be promptly evaluated to rule out tumors, vascular and other inflammatory conditions and for early treatment once the diagnosis is confirmed. Even after treatment, half of patients with STH will experience a recurrence within months or years. Recurrence may occur at the same site, at the contralateral site, or occasionally bilaterally [13].

Because the differential diagnosis is broad and patients can easily be misdiagnosed, a confirmed diagnosis of STH can only be reached after excluding other mimic entities. Cavernous sinus thrombosis is one of the main differential diagnoses; it may be septic, secondary to an infectious process, or aseptic. The patient may experience proptosis, swelling of the eyelids, lacrimation and chemosis in conjunction with eye pain and ophthalmoplegia [13].

Magnetic resonance imaging (MRI) is the most valuable imaging modality for differentiating STH from other differential diagnoses. It offers an accurate assessment and facilitates subsequent management plans [7]. However, cases of PTH without MRI features have been reported in the literature. [14].

A recent study in Qatar described the demographics of 31 patients (representing all those diagnosed with STH between January 2015 and December 2020) and mentioned that 71% of the patients were male and 29% were female. The median age was 40 years old. Most patients had visual disturbances; 70.9% of them had third nerve palsy. Abnormal MRI findings were detected in 64.5%. Most patients received steroids, with a response rate of 70.9% and a recurrence rate of 9.7%. Previous episodes of HRT and female sex were linked to higher recurrence rate (p-value 0.009 and 0.018) [15].

Tolosa Hunt Syndrome (THS) is considered one of the rare diseases documented by the National Organization for Rare Disorders (NORD), and very little is known about it at the primary care level. Patients with HRT present with painful ophthalmoplegia with a dramatic response to systemic corticosteroids. Given the importance of better coordination within the interprofessional team at the primary and secondary levels and for better delivery of care to patients affected by this syndrome, clinicians should be aware of the different causes of painful ophthalmoplegia, including the less common presentations.