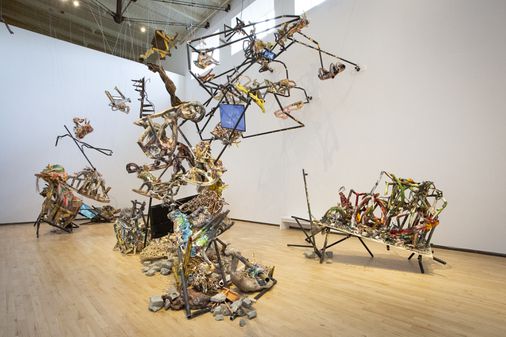 In the art world, the rules have always counted a bit too much. It’s an area that historically likes boxes and categories, the better to put things in and keep them outside. Consider the rough course of photography for nearly a century – a copying device, the old argument said, could hardly be an instrument for art – and the relatively recent arrival from ceramics to the credibility of the art world looks like the blink of an eye.

But there is an important distinction that makes the details clearer. New media like photography must always go beyond just being new and need artists to embrace their creative potential to prove it. The same was true for the video; and right now the booming field of digital art is still building its case for those who still need to be convinced.

Ceramics has never had a comparable early adoption syndrome; as a medium he is as old as the hills, or at least mankind. The prejudices against it were rooted less in its novelty than in the heavy historical freight it carried. Ceramics were decorative, or utilitarian, or women’s work, or ethnographic craftsmanship, and often all of the above, though all of them were easy to separate from exalted fields like painting.

The radical craft movements of the 1970s and 1980s pushed the practice forward, usually with a conscious embrace of negative stereotypes of the medium (“The Dinner Party,” Judy Chicago’s icon of the 1970s feminist art movement, not coincidentally with personalized ceramic cutlery for an esteemed group of feminist heroes). Later breakthroughs helped: British ceramist Grayson Perry won the 2003 Turner Prize, an annual prize in Britain which tends to honor a British artist considered to be at the forefront of contemporary thought.

So, at present, the modest status of the medium seems more of a relic than a current concern. This makes â€œCeramics in the Expanded Fieldâ€ a less radical proposition than a measure of how far the field has come. Even so, to work in ceramics is to carry one or all of its many cultural burdens, which each of the eight artists here fulfills naturally: of the eight, six are women, and of the two men, one is Mexican-American and the the other is black. Their work is rich and diverse, but in almost all cases marginalized stories have been ingrained.

Linda Sormin’s frantic assemblage shares the largest gallery here with the work of Nicole Cherubini and Francesca DiMattio. Cherubini’s pieces are rough, shiny perversions of ceramic standards like vases and urns; in a sly nod to a radical pioneer of women’s work, she lines the lip of a red and white piece with dark fur thatch (in 1936, surrealist icon Meret Oppenheim covered a spoon with fur , a saucer and a teacup and called it “Object”).

DiMattio makes broader connections, festooning his three towering totems with familiar motifs – one has pretty porcelain floral designs strung over arms of yellow quilted oven mitts; another has Blue Staffordshire birds and fish crawling over its shiny bulbous skin. A towering teapot-head piece is lacquered with what looks like cancerous, bubbling, scaly growths; pieces of ephemeral waste are encrusted in plates of his ceramic skin. She calls it “Teddy Bear Caryatid”, a collision between consumer culture and classical sculpture (a caryatid is a female form in ancient Greece used as an architectural medium). The work is an explosion of formal exuberance crossed by a feminist critique. It’s flirty, off-trend, and devious, and maybe the best thing here.

In the hallway, Anina Major has set up a long, waist-high wooden walkway over a bed of crushed seashells and crockery. There is a neon blue sign: “All Us Come Across Water”, associating the trauma of migration – forced or not, through the centuries – with the practice of manufacturing. At the end of its wooden dock are three large, heavily textured ceramic vessels; they’re braided or woven using a basket-making technique used by his ancestors in the Bahamas. But they are distorted and incomplete, resembling so much disembodied organs – vessels for the shattered continuity of memory and culture that displacement creates.

The catwalk leads to a space animated by ‘El Descanso en La Gloria’, a 2017 video by artist Armando Guadelupe CortÃ©s swinging a rough ceramic pot from her long braided hair and dropping it to the floor until it breaks. He shares a feeling with Sormin: breaking the old, creating the new. But Cortes is also a student of history, and the material itself has deep roots in the artist’s Mexican-American identity. An installation by CortÃ©s in a bright space adjacent to daylight is about construction: slender pine shapes installed around the building’s old structural pillars have been filled with clay, evoking traditional construction techniques from pre-colonial Mexico mixed with the wooden construction of possible settlers. Talismanic objects – a mask made for the celebration of Las Posadas, bottled folk remedies for scorpion bites, a dried ocotillo branch, feathered jewelry, a bowl of beans – are scattered throughout the light structure like flowers. offerings. It all seems precariously improvised, made up as it goes – as good a metaphor for the messy circumstances of contemporary life as any.

Nearby, Khalil Robert The Irving sandstone panels rest on high plateaus, each like a tablet or a rune. The panels, which are collectively referred to as “Many Grounds (Many Myths)”, are sleek and earthy, encrusted with remnants of contemporary life – a Camel cigarette label, a ceramic cast of a cartoon air freshener in pin, a handful of inspiring tweets. Irving takes the ancient techniques of the Antioch mosaics, which represented everyday life as well as the exalted myth, and appropriates it in a contemporary way; it’s like reading a scintillating pictogram recast into street poetry.

In the middle of it all is a pallet topped with milky, raw, unglazed charcoal tiles, resembling both a fractured slab of asphalt and a star-drenched sky. The distance between these two is the point. Irving’s practice is rooted in the heavy soil of his home in St. Louis, where dense clay deposits were made for solid brick, produced, historically, by black labor to build the homes and businesses of the rich. In the whirlwind and churning of the chalky black surface, you can see toil and struggle, and an eye to the heavens.