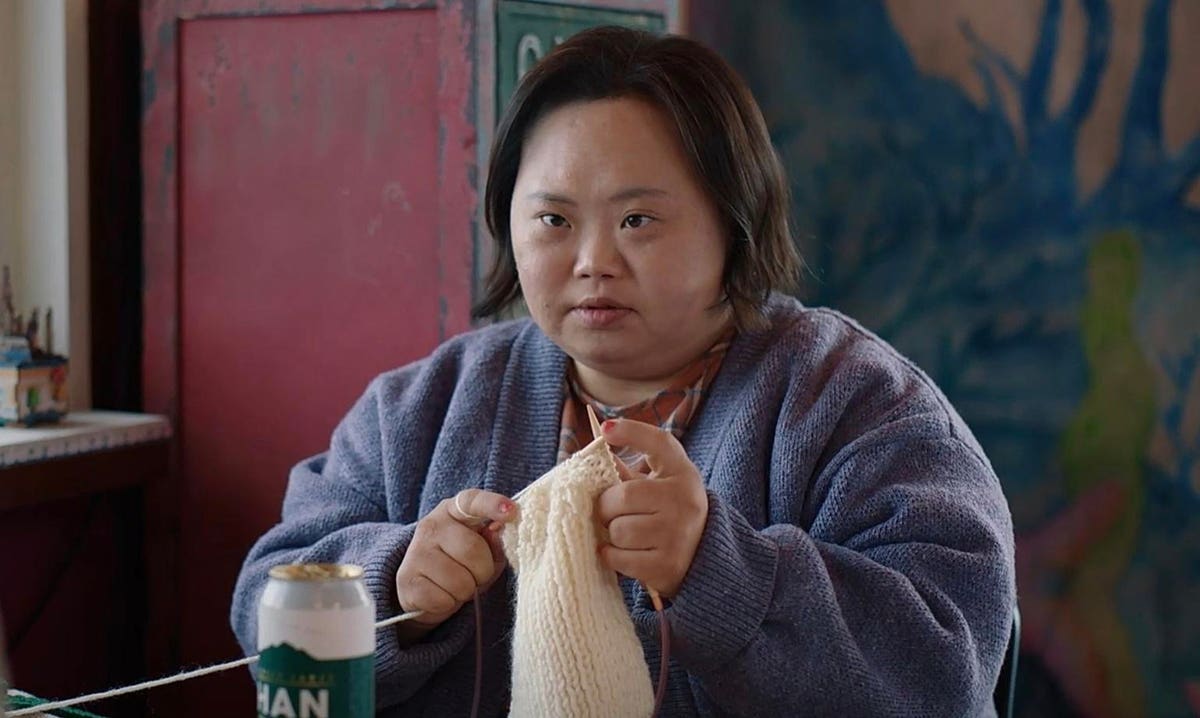 Han Ji-min plays Lee Young-ok, a woman with a secret, in the Korean drama Our blues. Young-ok tries to hide the fact that his twin sister Young-hee has Down syndrome and she worries about introducing Young-hee to her new friends. However, when Young-hee arrives in Young-ok’s village, everyone loves him and happily incorporates him into their daily lives. Young-hee is played by Jung Eun-hye, a woman with Down syndrome and, like her character, has a winning personality. Our blues Screenwriter Noh Hee-kyung created the role with Jung in mind.

Our blues wasn’t Jung’s first time on screen. She made her film debut in If you were me a film produced by the National Human Rights Commission of Korea. One of the episodes My sister, you must understand, depicts Eun-hye’s daily life at the age of 15. Jung is also the star of please make me pretty, a documentary directed by her father-in-law, director Seo Dong-il. The documentary follows her as she sets up a portrait stall in a market and draws caricatural sketches. Jung’s family encouraged his artistic talent and suggested that he do portraits at the market to provide him with more social interaction. His distinctive sketches became popular, leading to a solo exhibition.

“The writer of Our blues series, Noh Hee-kyung, came to see Eun-hye at her solo art show in fall 2020,” Seo said. “At the time, she was thinking of writing an episode about twin sisters for the series in which the older sister has Down’s syndrome. Noh has written about characters with disabilities before, but never been born with Down’s syndrome. Down requiring someone with it to capture the authenticity of the disability.

Noh had not planned to cast Jung for the role. She just wanted to interview him as part of her extensive research. After meeting and getting to know Jung, Noh was charmed.

“Rather than trying to create an imaginary character, Noh decided to center the twin sister around Eun-hye’s features and daily life,” Seo said. “Therefore, Young-hee’s character was someone who likes to dance, drink beer, knit, and is also a cartoonist.”

Jung never took acting lessons and Noh did not ask for any for the series.

“In fact, Noh said the actors she auditioned who had disabilities weren’t as natural as those who didn’t have lessons,” Seo said. “Eun-hye’s natural self was perfect for the role.”

Jung loves watching dramas and horror movies, so she was familiar with the work of her co-stars, Han Ji-min, Kim Woo-bin, Ko Du-shim, Kim Hye-ja, and Lee Jung-eun.

“Considering the majority of players in Our blues include some of Korea’s most well-known acclaimed talents, Eun-hye was thrilled to meet all of them and act together,” Seo said. “She really wanted to play well alongside the cast.”

According to Seo, acting in Our blues was a positive experience for Jung. She enjoyed interacting with cast and crew members on set and some of her cast sketches are displayed in Our blues.

“Since this was Eun-hye’s first experience on a studio set, there were a lot of concerns about managing the production schedule, such as early morning and late night shoots or rehearsals. same scenes,” Seo said. “She rose to the challenge and was determined to do well, so her dedication allowed her to enjoy her efforts and the finished product.”

Jung’s role in Our blues aroused much interest.

“Since the TV series aired, Eun-hye has experienced the creation and growth of her online fandom,” Seo said. “As the topic of Down syndrome continues to receive a lot of attention due to the show, fans are swarming with Eun-hye Youtube channel.”

The number of its subscribers increased by almost 1,000 daily after its Our blues broadcast episodes. Currently, Jung’s channel has over 31,000 subscribers who appreciate his wit, outspoken personality, and artwork.

“We have quite a few projects going on right now for Eun-hye,” Seo said. “The please make me pretty the theatrical release in Korea was delayed until the end of the television series on June 23. After the movie is released, Eun-hye will hold several fan meetings. As for future acting opportunities, given her affinity for horror films, she would potentially like to play a role in one.

Our Blues, a Sstudio Dragon production, streaming on Netflix. Given Jung’s success as Young-hee, his Our blues this role will probably not be the last.

Disability Could Not Deter Gujarat Rubber Girl From Excelling In Yoga