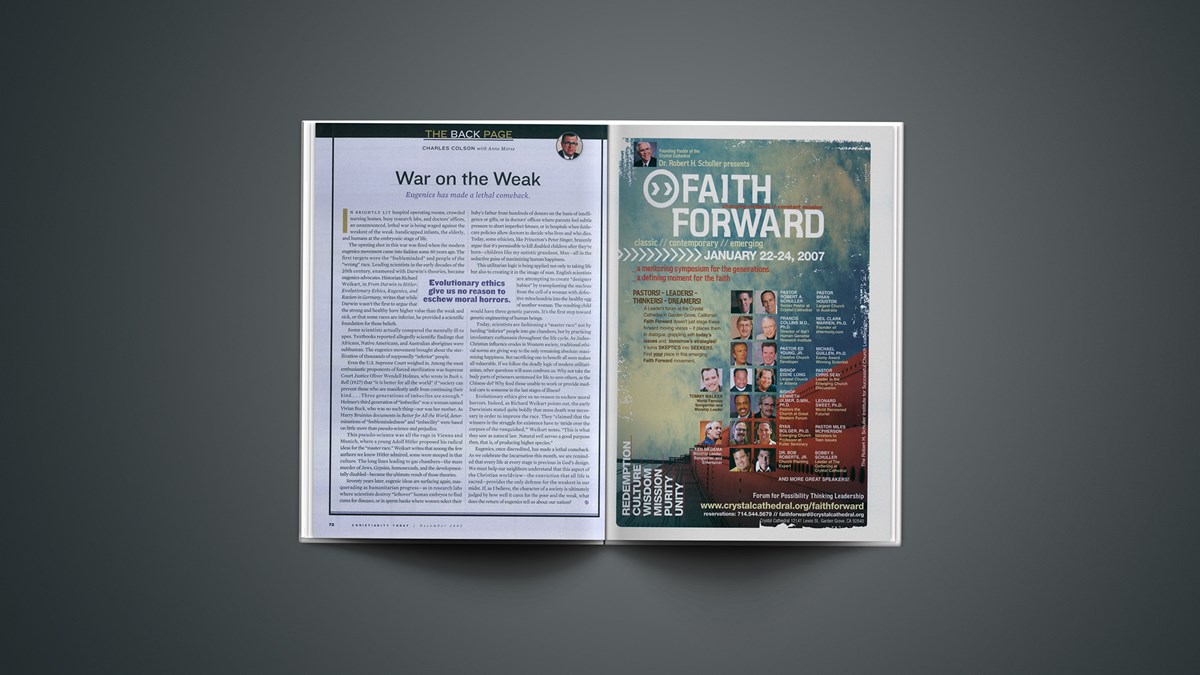 war against the weak | Christianity today

IIn brightly lit hospital operating rooms, crowded nursing homes, research labs and busy doctors’ offices, a deadly and unexpected war is being waged against the weakest of the weak: disabled infants, the elderly and humans in the embryonic stage of life.

This war kicked off when the modern eugenics movement came into fashion some 80 years ago. The first targets were the “feeble-minded” and the “wrong” race. Prominent scientists of the first decades of the 20th century, enamored with Darwin’s theories, became the advocates of eugenics. Historian Richard Weikart, in From Darwin to Hitler: Evolutionary Ethics, Eugenics and Racism in Germanywrites that although Darwin was not the first to argue that the strong and healthy are of higher value than the weak and sick, or that some races are inferior, he provided a scientific basis for these beliefs.

Some scientists have actually compared the mentally ill to monkeys. The textbooks reported supposedly scientific findings that Africans, Native Americans and Australian Aborigines were sub-human. The eugenics movement resulted in the sterilization of thousands of so-called “inferior” people.

Even the United States Supreme Court weighed in. Among the most enthusiastic proponents of forced sterilization was Supreme Court Justice Oliver Wendell Holmes, who wrote in Buck v. Bell (1927) that “it is better for the whole world” if “society can prevent those who are manifestly unfit from continuing their species…Three generations of fools are enough.” The third generation of Holmes’ “fools” was a woman named Vivian Buck, who was no such thing – nor was her mother. As Harry Bruinius documents in Better for All the World, determinations of “weakness of mind” and “imbecility” were…

You have reached the end of this article preview

Do you have anything to add on this subject? See something we missed? Share your comments here.

Charles Colson was the founder of Prison Fellowship Ministries, an outreach organization for convicts, victims of crime and justice workers. Colson, who converted to Christianity before being indicted on Watergate-related charges, has become one of the most influential voices of evangelicalism. His books included born again and How are we going to live now? A Christianity today A columnist since 1985, Colson died in 2012.